The Return of Sedna is Changing the Landscape of our World

These are unprecedented times to say the least. Never during our lifetime has the world been so connected, and affected by the systems that govern its people. In the Acutonics Community we are indoctrinated into the world of Sedna, and understand her myth, medicine, and message. This article discusses how Sedna’s evolutionary hand is catalyzing these changes, bringing both challenges and the promise of resolution. It also examines how Sedna’s chart interacts with the chart of the United States, and how the upcoming transits, most notably the eclipses of 2020 will impact both charts, and unleash a chain of events that will undoubtedly change reality as we currently perceive and experience it. 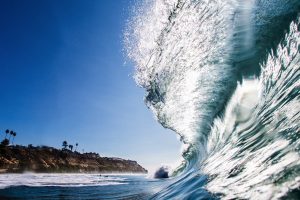 When I initially began the astrological analysis of Sedna with the US Chart, I’d like to say I was surprised. However, although the aspects astonished me, the feeling was accompanied by a “matter of course” realization: Sedna’s return after 11,500 years represents unrelenting power that simply will not allow crimes against Earth and her inhabitants to continue. This is good news…! It is the end of an age and also the beginning of a new one. It may not be an easy birth, but it will be a beautiful “baby” once born. Due to the multidimensional nature of Sedna as it relates to our world, it’s important to point out that Sedna’s myth encapsulates the hero/heroine’s journey of all three water signs: Cancer, Scorpio, and Pisces. Each one involves coming into emotional maturity and spiritual sovereignty in its own way.

Cancer makes the journey from infancy and vulnerability requiring care-taking to being caretaker, owning Capricorn’s executive abilities, and exuding inner authority. Scorpio must transcend the instinct for revenge in the aftermath of trauma, betrayal, or loss, and surrender to the death of the ego. Ultimately, it learns from Taurus how to rebuild something of lasting beauty, and must also “get comfortable” with its own power so that it can empower others appropriately. Pisces must learn to overcome escapism, addictions, and unhealthy boundaries that perpetuate deception, illusion, and adversely affect health. It must balance mystical vision with Virgo’s ability to bring those visions into tangible reality, and incorporate Virgo’s ability to discern what is needed from what needs to go.

As it pertains to collective evolution and our current events, we, as Earth’s inhabitants, are learning all three of these lessons. And as we progress into the summer months to the end of the year and beginning of 2021, the energies will intensify. We could look at any single aspect I’ve listed in this article, and find plenty of material to discuss. There is so much rich symbolism in Sedna’s message it is all worthy of our attention. However, for the purpose of this article, I’ve organized the material in three sections: 1) Sedna, Health, and Covid-19 2) How Sedna activates the US Chart, and 3) How Current Transits impact the US and Sedna’s chart.

The most obvious health topic these days is the Covid-19 event. All three lower vibrational (out of balance) components of the water signs’ journeys are quite evident at this time: an imbalance of power and resources (Scorpio-Taurus); an imbalance of social structures as they relate to people’s private lives (Cancer-Capricorn); an imbalance in the area of spiritual and physical health involving pharmacology and forced infirmity on individuals (Pisces-Virgo). As the immortal Sea Woman, Sedna regulates the ocean’s natural bounty to the Inuit people. When they have blatantly disregarded Nature’s laws and abused their stewardship, she withholds the abundance of the ocean waters, and requires that confessions be heard before provisions are restored.

In the human body, it is the lungs and kidneys that regulate the flow of water. Lungs regulate water in the upper half of the body, and kidneys regulate water in the lower half. The emotion associated with the lungs is grief, while the emotion associated with the kidneys is fear. Covid-19 attacks the lungs and fills them with water. This is one of the reasons fear is sweeping the globe. In fact, it is accurate to say that fear is the true pandemic, as it has been ignited and stoked by a constant barrage of information entering peoples’ minds as they are quarantined at home, hoping and waiting for a “cure”. Is there a solution? The one that the WHO and CDC want to provide is a fast-tracked untested vaccine. But those of us who study and practice natural forms of therapy, and trust in the body’s amazing ability to fight disease, may want to look for better alternatives. What is relevant is how we take care of ourselves. In order to do that, we need to ask ourselves what do we believe about health and the body’s immunity? More importantly, what have we experienced regarding the body/mind/spirit connection?

Let’s now look at the resolution of Sedna’s three-part journey involving the water signs. The high vibration of Cancer is about self-care and nurturance before it endeavors to care for its loved ones. It seeks its own counsel and cultivates inner authority. The high side of Scorpio is able to use laser-like focus to see through deception and manipulation. They hold their own authenticity no matter what the world around them is doing, and they empower others instead of abusing their power to manipulate and control. The high side of Pisces is able to form healthy boundaries, and distinguish what is truly necessary for them rather than sacrifice their wellbeing for others. They also know how to work in the unseen realm to bring about an ideal vision into physical reality.  The lesson inherent in these examples is recognizing and owning one’s own power to heal – to know “thyself”. This, of course, can easily be applied to all signs. However, Sedna pertains to the water element, and the emotion of fear; therefore it is the water signs about which we are concerned. Now let’s look at what the astrology has to say with regard to our collective journey and the changes we might expect to see over the coming months and years.

How Sedna activates the US Chart 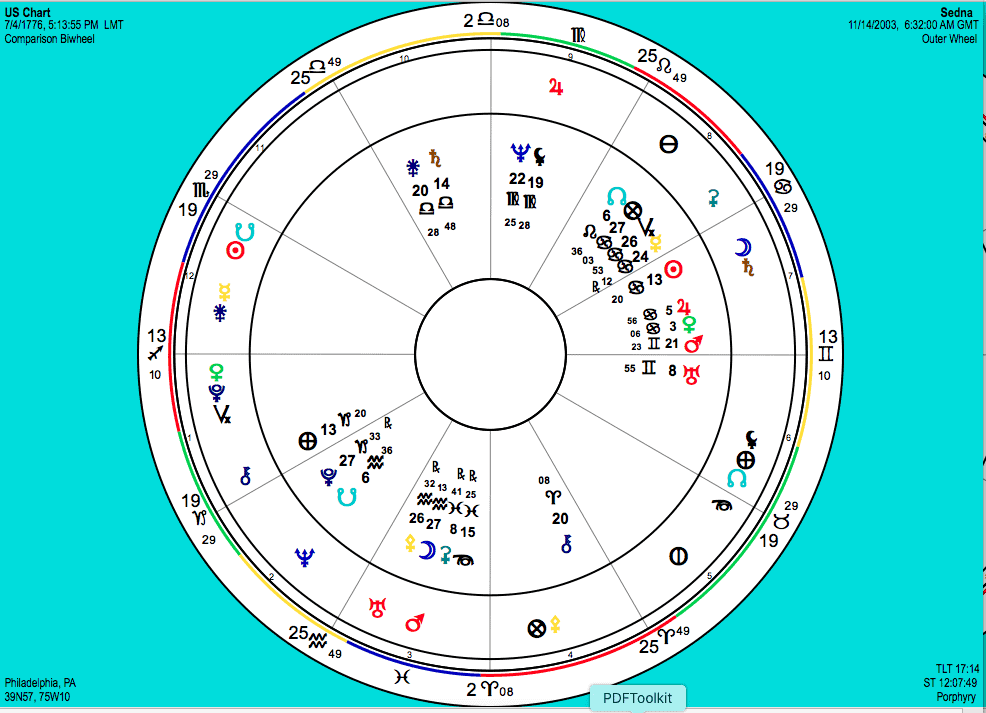 I’ve included a list of the connections between Sedna’s discovery chart and the US birth chart. Keep in mind that connections between the luminaries (Sun, Moon) and the Nodes of the moon are life altering. Venus attracts and harmonizes, Mars energizes, Jupiter magnifies, Saturn concentrates, Uranus awakens and revolutionizes, Neptune spiritualizes, Chiron heals, and Pluto transforms. With her epic return, Sedna is sweeping all of these energies into a giant tsunami and delivering them squarely onto our planet.  She is reaching every corner of the globe as the “Great and Terrible Mother”, and her transformation is on a scale like we have not seen nor will again in our lifetime.  Once Sedna has completed the exposing of certain unlawful behavior and held accountable those who have committed crimes against Nature and humanity, we will enter the new Golden Age of Light.  The only thing we need to do is stay open to changing the landscape of our own psyche, because the foundations upon which we have built our “truth” will never again be the same.

How Current Transits activate Sedna and the US Chart

Right now, transiting Pluto Rx is at 24 Capricorn and conjuncts the US natal Pluto at 27Capricorn, while transiting Uranus at 6 Taurus forms an exact T-square to the US Nodes at 6 Aquarius/Leo. The US is at a major crossroads as its people wake up to the corruption of the established order. Sedna’s chart is also activated by transiting Uranus as it squares her Neptune at 10 Aquarius, her Ascendant at 13 Leo, and applies a conjunction to Sedna herself at 17 Taurus. As the modern ruler of Aquarius, Uranus is activating Sedna’s energy, and will reach 17 Taurus in June, 2022.

The square of Uranus to Neptune represents a great spiritual awakening, and sudden breakthrough with regard to social systems and progress that will positively impact all of humankind (Aquarius). It may not feel this way as Pluto and Sedna continue to dredge up and expose all of the darkness that has been going on behind the scenes, but as we watch it all unfold it’s important to remember that Sedna’s purpose is to restore balance and harmony. In her chart we have a six-pointed star with one pyramid pointing towards heaven, and the other pointing towards earth. The manmade structures that have been in place for thousands of years have not served Earth or her inhabitants; Sedna is bringing a massive “energy tsunami” that will forever change the landscape of our world.

July 5 full moon 13 Capricorn: opposes US Sun exactly at 13 Cancer, conjunctions Sedna’s Chiron at 14 Cap, and opposes Sedna’s moon at 12 Cancer and her Saturn at 18 Cancer

To sum up the depth and breadth of these astrological cycles, we have only to consider the power of Pluto’s return to its natal position in the US chart and Sedna’s return to our solar system.  Anyone who has experienced a Pluto transit contacting a personal planet (Sun, Moon, Venus, etc), can attest to the fact that they are never again the same person.  They have undergone a death and rebirth of the Self.  This is because Pluto eliminates anything preventing the soul’s growth and evolution.

It takes Pluto 248 years to return to its natal position, therefore no human being will ever experience a Pluto return.  But the United States of America will experience this on 2/20/2022, the meaning of which is highly symbolic. Although these numbers reduce to a “10” or “1”, the series of “two’s” is also the number of the master builder, and when Pluto returns to its exact position in the 2nd house of resources and values, there will be a massive change to current power structures so that they can be rebuilt based upon a new set of values.

Now consider Sedna – with an orbit of  between 10,000-12,000 years.  This will exceed Pluto’s power by thousands, delivering monumental change on a global scale.  Anything built upon lies and self-serving action will be exposed and brought to justice so that we can build a new foundation based upon peace, environmental sustainability, and economic integrity for all.