The Power in Possibility

As we approach the second new moon of this month – a blue moon – on July 31st, which takes place at 8 degrees Leo, it feels appropriate to share the following excerpt from my book The Return of Planet Sedna. Leo rules the heart and the 5th house of the zodiac. It represents joy, childlike trust, love, creativity, and play – basically anything that inspires us to want to live. 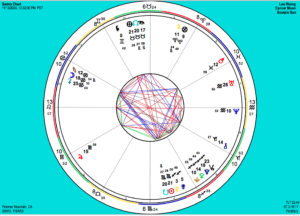 There is a prominent Leo/5th house theme in the Sedna discovery chart.  First, Leo is the rising sign (Ascendant), making the Sun the ruler of the chart.   And second, it is in the 5th house where the planetary rulers of the North and South Nodes, which describe our evolution of consciousness, sit in Sedna’s chart. So Sedna’s message holds a highly emphasized fifth house approach toward life.  Leo  lives in the moment, for the moment, and it provides a reprieve from any reminiscing or regret related to the past that Cancer, the sign before it, has a tendency to do.

The following story is one that literally wrote itself after a guided meditation in a writing class I took in 2005 called “Turning the Mundane into Myth”. We had to pull something out of our backpack about which to write, and I pulled out my “Nalgene” bottle. Almost as soon as I questioned what I could possibly write, I heard the words “The Genie from Nal”.

I share this story to inspire hope again, the hope that lives within every soul when it remembers itself through the unfolding miracle of the creative cosmos.

Happy Leo season, and heart-centered joy to you all,

Excerpt from The Return of Planet Sedna, pp. 2-6.

Once upon a time, there lived an old crone who liked to collect bottles. Made of glass and perfect for holding water, she had collected them in every color, shape, and size under the sun. One day, as she made her way through the village of Notimehere, she happened upon the most beautiful bottle she’d ever seen. It was made of pure gold and inlaid with diamonds, rubies, and pearls. But its most unusual feature was that it glowed with a halo as if beckoning life from another realm.

Well, being a collector, how could she resist? She scooped up the bottle and immediately heard a voice say, “Are you ready?”

She was so startled that she almost dropped the bottle but instead meekly asked, “Ready for what?”

At that moment, a purple mist poured out of the bottle, and a genie transformed from the fog. Upon seeing this, the old crone nearly died on the spot. Her heart leapt into her throat while her jaw sank to her knees, but her feet wouldn’t move at all.

“I am the Genie from Nal,” his voice boomed.

After collecting herself, the crone asked, “Where is Nal? And what brought you here?”

“Nal is a planet many light-years from Earth, a planet very advanced in technolog y, but its people are dying from lack of connection to the heart. And since no one connects with their heart anymore, what good is a genie who grants the heart’s wishes?”

As she listened, the crone’s fear turned to compassion while the genie explained how lonely he’d been and how useless he’d felt since his people had left him on Earth three thousand years ago. Then he asked her, “Do you believe in happily ever after?” And his question held a tone of sadness as if he’d given up on anyone ever believing again.

“But could you believe?” he persisted.

She thought for a moment and said, “Well, having met you I suppose anything is possible.”

Now the genie, having come from an advanced civilization, could see through the lies that had made the crone old.

“Dear one,” he explained, “your real father is Kairos, the God of Right Timing, not Chronos, for whom you were nicknamed by society. Chronos murdered your father so that he could take possession of all the time on Earth. He cast a spell on Earth’s inhabitants, so they would fear him above all other gods and never question his authority. Now is the right time for you, daughter of Kairos, to reverse this spell once and for all.”

“You must come to believe again in the power of Right Timing,” he explained. “Each night before bed for three consecutive nights call upon your ancestors, the three sisters of Kairos—Synchronicity, Serendipity, and Magic—and they will teach you while you sleep. What they teach you, you must practice, and you must pass on to the rest of humanity.”

And so it came to pass, on the third night, with the help of Synchronicity, Serendipity, and Magic, that the daughter of Kairos was able to reverse the curse of time. And Earth, once again, believed in happily ever after.

Despite its fairy tale nature, this story illustrates several personal truths: (1) a narrative I entertained regarding my perception of time, (2) my belief regarding time’s deleterious effects on the aging process, and (3) a loss of hope having to do with aging. Along with these negative notions, it also revealed three more uplifting truths: (1) my belief in magic as revealed through encounters with Synchronicity, Serendipity, and Magic, (2) a belief in “right timing” as the means to following one’s destiny, and (3) a profound and rather obstinate feeling that Earth will experience its happily ever after.

We may also interpret that the crone is meeting her own higher nature in the expression of the genie. Through this encounter, the realization begins to dawn that she no longer needs to be governed or enslaved by linear time (Chronos). Instead, she is capable of experiencing joy and freedom now by believing in “right timing” (Kairos). When we let go of limiting perceptions, learn to trust each moment as it unfolds even when facing heartache, disillusionment, or experiences that take us outside our comfort zone, and courageously follow the heart, suddenly the impossible becomes real…The line between myth and reality continues to blur, perhaps due to the fact that it is precisely our reality that gives meaning to myth. Our perception has everything to do with the reality we experience, but it is only when we are able to transcend our own doubt that we can perceive beyond the phenomenal world and receive wisdom from the extraphenomenal world.

Technological advances we couldn’t conceive of in the nineteenth and twentieth centuries are now occurring daily. Quantum science provides evidence that time and space are bendable, or malleable, and reveals the impact one’s observations have upon both. We find ourselves on the cusp of massive change in our cultural paradigm, often feeling pulled between two extremes. On the one hand, we can continue to perceive reality as we always have and perpetuate limiting experiences, or we can expand our perception and learn to leverage the vast and end- less potential available to us.

Myths contain magic, but our perception holds the key. What we focus on as life unfolds, and how we perceive it, becomes our reality. Does it matter to the patient if a placebo rather than an actual drug delivers the cure? How could something as simple as a change in perception resolve such complex medical issues? For that matter, how might a change in perception resolve the extremely polarized social, economic, and political viewpoints prevalent in our society today? Is it magic or cosmic law?

THE MESSAGE OF SEDNA 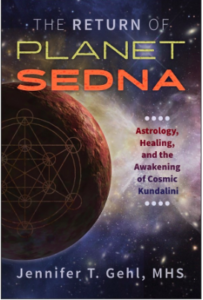 In 2003 astronomers discovered an object whose 11,500-year orbit ranged billions of miles from the Sun. Because it existed in such an extremely cold environment, the astronomers named it Sedna, after the woman in the Inuit legend who was exiled to the frigid waters of the Arctic Sea…Within the heart of Sedna’s message—metaphorically—is a bridge connecting legends from our past with possibilities for the future that empower the desire to create positive life stories in the present. Sedna’s message encourages us to become more conscious stewards of our language and perception so that we may regenerate life, reinvigorate health, and replenish hope. Rather than insisting on concrete definition, we are asked to entertain infinite possibility…The impact planet Sedna will have on the evolution of astrology, cul- ture, and science will no doubt unfold for years to come. That is in fact what makes it one of the most exciting horizons to explore, for we get to engage in the process of rescripting our story—and recalibrating our molecular bodies—as it unfolds.

In planetary and quantum science, discoveries are intensifying at such an alarming rate that we can easily feel overwhelmed. Perhaps there is too much “newness” to assimilate, compelling us to reexamine our notion of time and space. This is precisely when we need to slow down, return to Self, and remember who we are. Yes, we are humans dwelling on planet Earth, but we are also beings of the cosmos—created from the fabric of the infinite with order and harmony that surpasses human understanding. Instead of allowing the past to determine what lies ahead, a past already defined by those with a predisposed agenda, we can choose to explore the world of myth and mystery. In doing so, we may not only learn that our past requires redefining but also that our present moment contains endless possibilities for a brighter future.

Order your copy of The Return of Planet Sedna: Astrology, Healing, and the Awakening of Cosmic Kundalini.

Please join my community!  Listen to this month’s AstroSound to align with higher galactic frequencies.

RECEIVE A FREE NATAL CHART AND REPORT WHEN YOU SIGN-UP!!