Leo Full Moon: The Shift of the Ages Lights Our Way

On February 16 we have a Leo full moon that lights our way forward as the shift of the ages proceeds unhindered.

In this chart, there is a “fan” pattern where all of the planets can be seen across one third of the chart, while the moon is the focal point for these energies.

Symbolically this means that there is a great deal of energy supporting expression of the moon and, in the sign Leo, the energy is one of confidence, determination, and an unrelenting need to be seen and heard.

Leo is the king/queen of the jungle, and planets in that sign are accustomed to getting their way.  The moon represents the public, and this Leo full moon seems to be saying that the public will be seen and heard dramatically.

At the start of this month the Chinese New Year began, ushering in the year of the Water Tiger.  Tigers are known for their adventurous spirit and need for freedom.  So combined with the Leo full moon, there seems to be strong message that basically says “Oppressors Beware”.  Any type of energy that seeks to “shut up or shut down” the Leo moon in a Tiger year will not be tolerated, nor should it be.

Leo also represents royalty, and reminds us that we are each a miraculous microcosm of the Almighty Source, with the unalienable right to access Creator directly – without hindrance, interference, or any person, priest, or guru, trying to control who we are and how we express ourselves.

Ultimately, Leo represents life force energy, and demands that reverence for all life be upheld, especially the innocent and vulnerable.   Its message asks us to remember that “to enter the kingdom we must become as a little child”, able to see the good that is transpiring even amid the rubble and remains of a dying age.

The energy reminds me of Simba in The Lion King, who, in a vision, saw and heard his deceased father say “Remember who you are!”  We may, for a time, abdicate the inner throne of authority in our lives, but in doing so, we abandon ourselves and humanity in the “circle of life” in the process.  This Leo full moon asks us to return to the inner throne, connect with divine Source, and take full command of our lives. 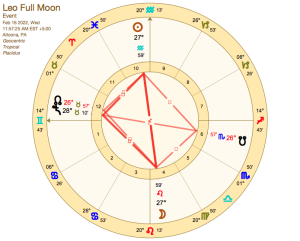 The opposition between the sun and moon that creates the full moon also forms a grand cross with the nodes of the moon in Scorpio and Taurus.

These four signs, Aquarius, Leo, Scorpio, and Taurus, are the fixed signs of the zodiac, unrelenting in their focus, and creating that much more power and determination.

Those who oppose or oppress will soon discover that it is pointless to try to “mutate” this energy.  We’ve already completed our tour of the mutable signs Sagittarius, Gemini, Virgo, and Pisces.  There is no going back. 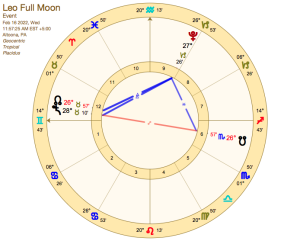 With harmonious support from Pluto to both the North and South Nodes, there is an iron will of self-determination that guides our collective path forward.

Pluto will mete out justice on those who have abused their power to serve their own agenda.  This is especially true as the ruler of the Scorpio South Node.

Pluto’s trine to the North Node also supports Sedna’s energy as it conjuncts the North Node.  Together, Pluto and Sedna are irrevocably changing the world we have always known, and this is good news.

Every manmade system has far surpassed its usefulness and sustainability, and must now be overhauled.  This is what Pluto and Sedna are teaming up to accomplish.  And while they each have the quality of resurrecting life, they also each share the energy of divine justice.

Pluto and Sedna expose what has been hidden for extended periods of time, well beyond just “decades”.  On 2/22/22, after a 248-year orbit, Pluto will return to its original position in the USA’s “natal” chart from July 4, 1776.  As such, it will inevitably reveal the corruption of those in power.

Discovered in 2003, Sedna’s 10,000-12,000 year orbit has been exposing a type of greed that destroys the environment and cares nothing for life in general, especially our waters and oceans.  In the meantime, we can help by trusting the process of divine will as it unfolds.  Not everything is as it seems on the surface of world events. 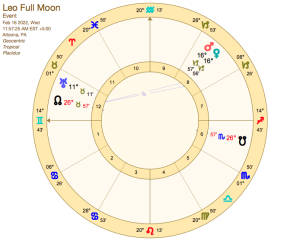 Mars and Venus join forces in Capricorn, and receive harmonious support from Uranus, modern ruler of the Age of Aquarius, and revolutionary freedom fighter.

The war of the sexes, like every other conjured war designed to divide humanity, is also coming to an end.  Mars and Venus will be traveling together in conjunction for an unprecedented five weeks.

By March 2nd they will form an exact trine to the Taurus North Node in full support of our path toward peace and prosperity.  They will then enter Aquarius and continue traveling together until the end of March.

The heavens are aligning to restore peace on our planet despite any appearance to the contrary.  It is our choice, however, to remain in the lower dimensional focus of fear, or to align with the higher octaves of consciousness that restore our faith and trust in this monumental (and galactic) shift into the new age.

What we can do to ensure a more peaceful transition for ourselves and the planet is to remember our divine origin and connect to it daily.  We can command the forces of light to transmute negative energies and entities across all time, space, and dimensions.

To assist you in staying aligned with, and focused on, the higher dimensions and intentions, I’ve created an Astrosonics recording for the Leo full moon frequencies as well as their healing affirmations listed below.

If you’d like group support, please join me this Sunday, February 13, at 11 am EST, for our monthly meditation Astrosonics World of Harmony.

May Mighty Blessings unfold for the greatest good of all,

I now release all energies, thoughts, & behaviors that undermine my complete divine potential from being expressed

I now awaken to recognizing, and fully embodying, my divine potential.

I now awaken to recognizing, and fully embodying, my own divine masculine and feminine energies that allow me to align with my higher purpose in this life.

Pluto with Sedna for the trine

I surrender all negative patterns, especially that of fear, that have kept me in a loop of repeated trauma, and now allow the rebirth and resurrection of my full divine potential.

Venus with Sedna for Sedna conjunction to Taurus North Node

I now allow, expect, and fully embrace, the infinite miracles that are abundantly supporting all life across all time, space, and dimensions.

Pluto with Venus for the Scorpio-Taurus Nodes

I perceive any and all false patterns that promote a “love for power” and immediately transform it to the “power of love”.

I embrace my fullest potential and power, which can only come from Divine Source.

I accept the power of my emotions to reveal to me who I am and what I still need to heal, and call upon the Divine Creator to fulfill that healing.

I now allow peace and prosperity to fully manifest in my being and in my life.

I now allow peace and prosperity to fully guide my emotional nature so that I may be of service in facilitating the same for others.