With the September 28 Libra New Moon, occurring at 7:27 pm EST, we look to the ruling planet Venus for some important aspects affecting this new cycle of growth.  We have a conjunction to Mercury, an exact sextile to Jupiter, a quincunx to Neptune, a square to Pluto, and a square to the North and South Nodes.  So let’s look at each one to understand more completely what these aspects have to offer in the way of soul growth and change. 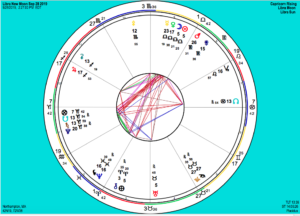 In general, these aspects are helping us move in the right direction, and anything stubbornly holding on to outworn patterns will be addressed by the exact quincunx from Uranus to the New Moon.

Uranus, at 5 Taurus represents change, perhaps radical change, in the area of values, resources, real estate and security (Taurus).  The Libra New Moon represents a new cycle of growth affecting our relationships and connections, specifically in the area of life ruled by Libra (look to the house in which Libra sits).

The exact quincunx asks us to reconcile two facets of life that seem to be at odds with each other: independence, innovation, and individuality (Uranus) with our personal and professional connections (Venus).  Quincunxes are difficult to manage in and of themselves, and Uranus always brings spontaneity and surprises, but because Venus rules both Taurus and Libra, there is common ground to be found.  Whatever changes Uranus throws at us will ultimately lead to Venusian satisfaction, security and harmonious connections.

Full Moon in Pisces: Stepping Outside of Time Aries Full Moon: Under Pressure

Virgo New Moon: Our Beliefs around Health are Changing