The October 16 Libra  New Moon (NM) is ushering in a new cycle of justice.  In this chart, we have Mars at 20 Aries, opposing the new moon, and also activating the opposition in the US Chart between Juno at 20 Libra and Chiron at 20 Aries.  Juno is the asteroid goddess representing Jupiter’s wife, and she advocates for equality and fairness in all relationships between the opposites, especially those related to partnerships, regardless of gender orientation.  Chiron is the wounded healer who bridges the personal and transpersonal energies together, turning past personal trauma into healing energies that benefit one and all. 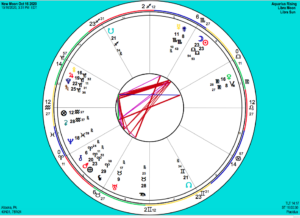 This NM forms a square to Saturn at 25 Capricorn, an energy concerned with authority, discipline, and integrity, all of which provide the foundation for authentic justice.  Where the two are now conflicting has more to do with compromise  vs. authority.  The question of how much we are willing to compromise, and on what issues,  vs. the question of whose voice of authority do we listen to and in which we should  place our trust?  However, both Libra and Capricorn have the “law” in common.  Squares between the Sun and Saturn also illuminate our fears, and emphasize the importance of growth and maturity over time.  Perhaps what we previously feared will turn out to be nothing, while a former voice of authority could turn out to be “something”. 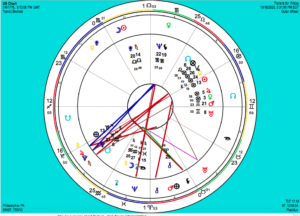 Squares represent a crisis and turning point that leads to something new. Integrity (Capricorn) is demanded of those currently in, or coming into, positions of power.  Saturn slows down the process to ensure that every piece of the new foundation is properly secured.  This square also activates the US chart’s Pluto at 27 Capricorn in the 2nd house, representing renovation in the area of values, economics, and resources.  This is a prerequisite for the Pluto Return that makes its first exact hit on 2/20/22, a subject I have previously covered.

This NM also trines the US Chart’s Moon at 27 Aquarius, so it supports energies related to Aquarian principles, such as freedom, an entrepreneurial spirit, innovation, creativity, humanitarian endeavors, and the highest vibration of high tech.  Saturn is the traditional ruler of Aquarius, and the square from Saturn to this NM will ensure that all pieces of this puzzle are properly in place before new structures and systems can be (re)built  Despite the element of time, we can expect to see sudden (and shocking) developments when the modern ruler of Aquarius – Uranus – makes a prominent appearance at this month’s blue moon.

The Full Moon (FM) on October 31 at 8 degrees of Taurus forms an exact conjunction with Uranus, the planet of sudden change, unexpected twists of fate, and “earth-shattering” developments, especially when it occupies the sign Taurus.  In addition, when we have two full moons in one month, the second is called a “blue moon”, so the expression “once in a blue moon” will apply.  This FM creates a grand square to the US Chart’s North Node (NN) in Leo and South Node (SN) in Aquarius, thereby setting in motion another crisis and turning point that impacts our nation’s destiny. And the fact that Uranus rules our SN means that something from our history will be illuminated suddenly, perhaps shockingly. 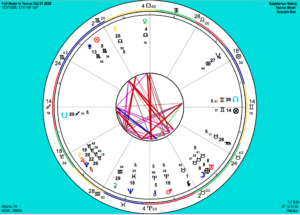 From Heartless to Heart-Centered

No one can predict what sort of  surprising developments will occur with this Uranus conjunction, but the planet’s ultimate purpose is to deliver liberation.   Only by  truly connecting with our own heart center can we positively influence the outcome in the collective, and by doing so, we are contributing to the sunnier side of our Leonine destiny.  Hopefully, this is something upon which we can all agree and around which we can unite.