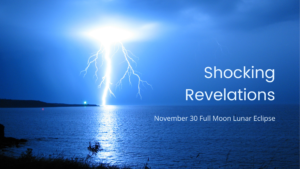 On November 30, we have a full moon lunar eclipse at 8 Gemini, which will be exactly conjunct the USA chart’s Uranus.  Uranus represents the people, social reform, awakening, freedom, disruption to the status quo. It also represents sudden change, and the eclipse accelerates change.  Uranus’s symbol holds the cross of matter with antennae on the east-west axis on top of the sphere representing spirit.  When the public is looking to the West, shocking surprises come out of the East, and vice versa.

With this full moon lunar eclipse exactly conjunct the planet representing the public, it is likely that something will erupt that sheds light on how “we the people” have been

Gemini, (the Twins), rules the mind.  In its lower vibrational expression it exaggerates duality, seeing things only in black and white, and unable to see the big picture unfolding.  Something is likely to shatter this “frog in the well” perspective and blow people’s minds with information that illuminates the truth.

Uranus also rules communication systems such as the internet, high tech science, and how information gets circulated among the people.  All of these areas are subject to major revolution and overhaul with the influence of this eclipse.

Other Aspects Impacting the USA

On the day before the full moon, Sedna moves back to 27 Taurus, and this degree symbolizes second chances.  It refers to awakening or reawakening one’s passion for life, “a person in middle life stands in a rapt sudden realization of forgotten charms.”

Mercury, at 27 Scorpio refers to  “The King of the fairies approaching his domain”.  Mercury holds great significance as the ruler of the Gemini North Node, where we are heading in the collective.  This symbol represents returning to home, to what feels right and good, to our domain, and to having sovereignty in our own home and lives.

Both Sedna and Mercury form harmonious aspects to the USA’s Pluto at 27 Capricorn.  Mercury forms an exact sextile, while Sedna forms an exact trine.  This means that second chances, a recapitulation of passion for our homeland and home life, is being supported at the local and non-local levels…the microcosm and the macrocosm.

Pluto teaches us the correct use of power, and Capricorn demands integrity.  Leaders who are in power, or who hope to return to power, must hold the highest intentions for “the people” or they will not be able to “return as the ‘king'”.

The Gemini Lunar Eclipse is eclipsing out the moon and highlights the Sun at 8 Sagittarius.  This symbol reads: “A mother leads her small child step by step up the stairs”.  Those who are not as far along on the journey, or who have only been able to see things in “black and white” will require leadership and guidance to see the bigger picture.

Last but not least, in this full moon chart, Venus occupies 10 Scorpio, and this symbol reads: “A Drowning person is being rescued”.  It echoes the legend of Sedna, in which her death by drowning made her immortal and provided abundant sea life for the Inuit people.

And as the immortal sea woman, Sedna had the power to withhold abundance when the people disregarded Nature’s law of reciprocity.

Perhaps this symbol of being rescued at the moment one needs it the most, will bring second chances at life when it appears as though no justice can be found. If so, the things that inspire hearts and that literally and symbolically bring us back home are on the horizon.

Controversial Race to the White House: Tortoise and the Hare? December 14 New Moon Solar Eclipse, Sidney Powell, and the USA