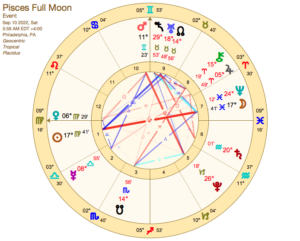 We’ve all had experiences in our lives when something we believed to be a “dream come true” turned out to be quite the opposite.

What the September 10 Pisces Full Moon is illuminating are those areas where we’ve held onto certain illusions in our personal lives.

Our former perceptions of certain situations, people, and experiences are undergoing significant dissolution.

The universe is asking us to surrender to this process so that a more authentic, stable “dream” can actually be built through the energy of the Taurus North Node and its conjunction to Uranus, both of which are calling us to look toward the future.

Neptune is the modern ruler of Pisces, and its conjunction to the moon emphasizes the need to allow past illusions to dissolve completely, while the Virgo Sun is saying “let’s get real”, “let’s use our common sense”.  The Sun does have its challenges, however, and these we will each need to address in our own lives. 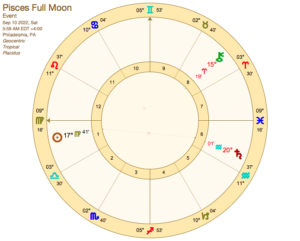 There is a quincunx from Chiron in Aries to the Sun, and on the other side we have Saturn in Aquarius forming a quincunx.

This is what astrologers call a “Yod” or “finger of God”, in which divine orchestration is working behind the scenes to fulfill the expression of these energies.

The Sun is the focal point of this yod, and is being called upon to blend the highest expression of both Chiron in Aires and Saturn in Aquarius.

The Blend of Virgo, Aries, and Aquarius

Chiron in Aries is about healing the individual will and independent spirit.  Saturn in Aquarius is about claiming our authority (Saturn) as a human family (Aquarius) – taking the lead in our own destiny rather than “being bossed” by others.

In the collective, we continue to witness the systems (Saturn) seeking to control people (Aquarius) rather than lead by example.  Leaders are to serve the will of the people, but if the people have lost their will (Chiron in Aries), they suffer the consequences of authoritarian domination (Saturn in Aquarius).

So this Virgo Sun is asking us to clean house, to use common sense in determining and discerning who is worthy of our trust and who is not.  Where have we lost the will to direct our own lives (Aries), and allowed another to take the reins?

This Pisces Full Moon will reveal where, how, and to what degree we have placed faith in those who have never had our best interests in mind.  The good news is that there are energies paving the way to assist us in correcting misperceptions, but it will require us to be willing to admit where we have been misled.

Favorable Aspects to the Moon and Sun 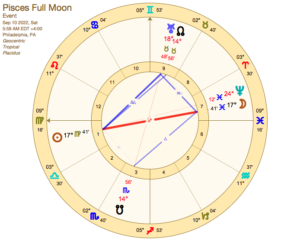 There are favorable aspects to both the Sun and the Moon/Neptune conjunction that are paving the way to succeed in this endeavor.

Just as a yod holds a “destined” energy, so too does the North Node.  As I’ve stated in previous articles, Uranus is  the modern ruler of Aquarius.  More importantly, however, as the more distant planet, its impact holds greater power than Saturn’s.

With its conjunction to the North Node, Uranus is helping us shake off the shackles of outside authority and emerge from the abyss of Piscean illusions.  If it were conjunct the South Node, the impact would be adversarial, so thank heaven – literally – that Uranus is working on the right side of destiny.

The biggest lesson of Pisces and Neptune: “Things are NOT as they APPEAR”. 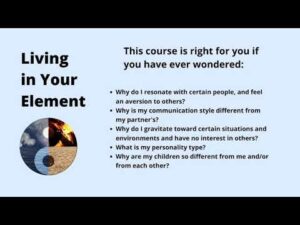 Discount ends at midnight tonight!! Register now for Living in Your Element.

This course is available “virtually” as well as in person, so no matter where you live, you can participate.

Click this link for more information on the course, to fill out the form and click the payment link at the top!