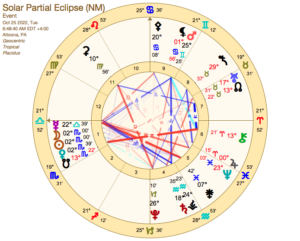 The New Moon Solar Eclipse (SE) in Scorpio on October 25 is already revealing its potency.  The Scorpio-Taurus axis is all about focus (Scorpio) and fertility (Taurus).

Exactly what do we wish to grow?  Whatever we give our attention to is what we will manifest in our world.

It’s analogous to the Cherokee legend “Tale of Two Wolves”.

One represents the negative states of anger, jealousy, greed, self-pity, fear, resentment, arrogance, lies, etc.  The other represents positive states, such as love, joy, peace, hope, generosity, compassion, humility, and truth.  Whichever wolf we feed is the one that “wins”.

This Scorpio New Moon SE highlights these two extremes with even greater contrast, and it’s up to us to determine which one we choose to feed.

For those who may not know astrology, or be familiar with the flow of rulership, bear with me ~ this is important.  Scorpio has two co-rulers, Mars and Pluto, yet it has three symbols associated with it: the scorpion, phoenix, and eagle.  [I propose a new way of perceiving Scorpio’s rulers and symbology a little later in this article.]

Mars is Scorpio’s ancient ruler, and because it is closer to Earth, it pertains more to what drives our lives at the personal level, and the “ego identity” that distinguishes our journey from another’s.

Pluto, as the modern ruler of Scorpio and the planet much further away from Earth, pertains to the collective human psyche, and reveals the hidden underpinnings within any power struggle we encounter.

The further away from Earth a planet is the greater its impact on our collective evolution.

Pluto certainly influences our lives at the personal level, especially with regard to taming the “negative wolf” and feeding the positive one.  It is because of its impact at the global level of leadership, however, that I refer to it in the flow of rulership instead of Mars.

The Flow of Rulership for this New Moon:

1) Pluto is in Capricorn, completing its journey through that sign, and is influenced by Saturn (Capricorn’s ruler).

2) Saturn is in Aquarius, and although it co-rules that sign along with Uranus,  it must defer to Uranus as it is the more distant planet.

3) Uranus is in Taurus, and must defer to Venus (Taurus’s ruler).

4) Venus is in Scorpio, and refers back to Pluto, where we began the flow of rulership.

Because it is also conjunct this Scorpio New Moon, it holds great significance!

More importantly, Venus rules the Taurus North Node, a destiny point representing unfamiliar territory to us.  In this case, Taurean long lasting peace and prosperity. The conjunction of Venus to the Scorpio New Moon means that things are aligning to fulfill this destiny, however unfamiliar it may seem.

How are we using Venus’s Frequency?

Venus represents an ability to magnetize and attract all that we love into our lives. The sign Taurus attracts material resources to build and grow, to “fertilize”, something long-lasting and sustainable.

It also represents the voice, and the act of drawing to ourselves that which we value. What we speak about we bring about. How are we using our voice? Are we speaking about peace, and calling in what we desire?  Or are we speaking about things we do not value, that instead cause consternation, and drawing to us the very thing we fear the most?

Whatever we give voice to “speaks” to our personal values.  By speaking it, we give it the power to manifest.

The fact that this new moon is a partial solar eclipse means that we have an opportunity to allow the “negative wolf” to be eclipsed out of our lives for good.

Over the coming 3-6 months, we can authentically and powerfully purge all that gets in the way of our Taurean North Node destiny.

With regard to Pluto and our collective transformation, I so often hear the question: “What about Pluto’s demotion to dwarf planet?  Is it really that important?”  I reply with the analogy of the tiny atom that became a weapon of mass destruction.

The nuclear bombs that detonated in 1945 came into being around the time of Pluto’s discovery in 1930.  How ironic is it that we are, once again, hearing the reverberations of nuclear war?

Pluto symbolizes our deepest fears and desires.  Its lesson epitomizes the Cherokee legend mentioned above.   When we maintain integrity in the small decisions, we can then be entrusted with more power.  With Pluto, even the tiniest impulse can cause a tidal wave.

Our thoughts, words, and deeds, however small or seemingly insignificant, hold enormous power.

On the topic of Scorpio’s energy and influence, I have lifelong experience.  My rising sign, Neptune, Venus, Mercury, and Sun all occupy the sign of Scorpio in the first house of identity.

It is for this reason, as well as my books on planetary science, that I feel qualified to speak on this subject.

Scorpio teaches us how to use power wisely. Its journey includes many lessons on how to not give our own power away to those who lack integrity.

As stated above, it is the only sign in the zodiac with three symbols: the scorpion, phoenix, and eagle; yet it has so far only been assigned two ruling planets (Mars and Pluto).

Each symbol represents a stage of growth or state of consciousness.  How we navigate through these stages toward our evolution defines Scorpio’s energy, but the planetary rulers spark the impulse.

Perhaps there will be a third planet assigned to Scorpio at some point in the future.  Until then, I perceive Sedna as the third (potential) ruling planet.  Sedna’s symbology encompasses the death of the ego (Mars), exploitation of her innocence as a child (Pluto), and transcending Pluto’s energy by becoming the Immortal Sea Woman.

Planet Sedna was discovered in 2003, and is so far beyond our solar system it was assigned its own category called “sednoid”.  Astronomers named the planet after the Inuit Legend of the Immortal Sea Woman.

While the Inuit do not believe in “gods or goddesses”, they do revere all life as being sacred, recognizing that Infinite Source dwells within all beings.  They also believe in the power of language to create life or conjure death and destruction.

That legend states that, upon her drowning, Sedna’s hands and fingers became the sea life that provides food and sustenance for the very community that abandoned her.  Symbolically, her underwater world in the frigid Arctic Sea represents parts of our own psyche that have been left out in the cold to die.  Sedna reveals the way to heal from deep trauma.

Mars and the Scorpion – Lower World

Mars corresponds to the scorpion, whose instinct it is to sting no matter what.  It will even sting itself to death rather than show vulnerability by being killed by another creature.  It lacks the capability to evolve beyond the reactionary instinct of “kill or be killed”.

Pluto and the Phoenix – Middle World

Pluto represents the Phoenix.  Through the process of death and rebirth, a new form is created out of the ashes of the old.  Pluto’s energy need not be feared when we realize that the only thing dying is the angry, negative wolf.

What is reborn is purified consciousness, now equipped to transform every negative experience – even those invisible to others – and feed the positive wolf.

Sedna and the Eagle – Upper World

Sedna represents the eagle, a symbol of consummate freedom.  Sedna teaches us how to transcend Pluto’s perpetual cycle of death and rebirth to rise higher and ride the current of Great Spirit that allows us to soar.  Eagles are acutely aware of the lower world’s activities, yet also epitomize the independence that allows them to stay above the drama playing out below – to be “in the world but not of it”.

In Sedna’s chart, we have Leo rising, ruled by her Sun in Scorpio, which is conjunct the South Node. The planet Sedna itself occupies Taurus and is conjunct the North Node.

Both rulers of Sedna’s Nodes – Pluto (SN) and Venus (NN) – are conjunct in the 5th house – the house of Leo’s natural domain.

What this means is that Sedna’s destiny, and consequently what the planet’s lesson signifies for us – is a return to innocence.  The Pluto and Venus conjunction is similar to the current Venus conjunction to the Scorpio New Moon.

It represents the “power of love” triumphant over the “love of power”.

With planet Sedna’s conjunction to her Taurus North Node, the same placement as our current transits, it signifies that our past and future are converging.  It is time for us to step into our multidimensional wholeness, the blending of our ancient roots with our future self.  And the way we do that is by healing the inner child and staying present in the NOW.

We are returning to the ways of our ancient ancestors who lived in harmony with Earth, while also embracing our “future” galactic nature.

Venus is reminding us that we do have a voice, even when we feel “invisible”. We cast our votes everyday by the way we manage our own energy, emotions, and language.

And to the degree that we can recognize our origin, as beings created by Infinite Source, that is the degree to which we extend reverence to ALL life, transcend controversial extremes, and soar as if on eagle’s wings.

Sending blessings of joy and abundance,