Trust the Heart, Tame the Mind

The Lion’s gate Leo New Moon on August 8 at 9:50 am EDT, represents the heart and the voice of the inner child.  Children instinctually know their birthright; that is, until it is educated out of them.  The fundamental need for the sign of Leo is to be heard.  When others fail to take Leo seriously, or attempt to trivialize what they feel and express, they are met with a very loud roar.  This new moon is a time for all of us to get in touch with the inner child we may have silenced, or told to take a backseat to the “adults who know better” represented by the opposite sign of Aquarius.

Mercury in Leo Points the Way

Mercury, now at 23 Leo, conjuncts this New Moon and forms an opposition to Jupiter, which magnifies our need to communicate. But this opposition holds greater significance due to the fact that Mercury rules the North Node, the direction in which we are heading, while Jupiter rules the South Node, the past conditioning we are outgrowing.  In Aquarius, what we are outgrowing is an extreme expression of intellectual and scientific “advancement” that has eclipsed the Leo heart-centered life.

Our past and future are coming to a head, and this Leo New Moon conjunct Mercury, is giving us a clear direction to follow.  To repeat the past is to succumb to the low vibe of Aquarius, which hasn’t learned to balance the head with the heart.  Without the heart, Aquarius can be cold, aloof, and cruel. The high side of Aquarius seeks to liberate us from old concepts that no longer serve our highest good.  It’s able to to exchange dialog with the instant knowing of the heart.

On August 11, Mercury will reach 29 Leo, at which point a T-Square from Sedna to Mercury and Jupiter will bring further tension between the old controlling energies that seek to keep us from our true destiny, which is freedom.  Sedna in Taurus has been holding the energy for our multi-dimensional selves to wake up from the illusion.

In Sedna’s myth, the being disguised as a handsome suitor making promises to take care of her and her family, revealed his true nature and intentions once they were married.  Rather than experiencing a comfortable home, she found herself enslaved to a sea creature, responsible for her ultimate death and drowning.  This T-Square will be revealing to us the ways in which we have been conned into giving our power away to untrustworthy beings.

Sedna’s intentions to bring security to her family through the “old and established” tribal ways were the cause of her demise.  She had to surrender to the death of her old life in order to be transformed into the Immortal Sea Woman.  Her healing message and connection to the ocean directly relates to our ancient ancestry, DNA, and the emotion of fear – all of the components associated with kidneys and the water element in Chinese Medicine.  Fear and trauma represent the old ways of experiencing life.  We are being called to remember and reclaim our original birthright as souls who are free.

The Mind (Mercury) must Defer to the Heart (Leo)

Mercury rules the personal mind and, as ruler of the North Node, where our destiny lies, is combining with the Leo New Moon to remind us – literally RE-Mind us – that the heart has to lead the way.  Children instantly know what is true about people and situations without the need for intellectual analysis or proof.  When we follow the inclinations of the heart, it leads us to more joy, expression, and freedom – all things that make life worthwhile.

Chiron forms a beautiful trine to the Leo New Moon, and in Aries, is lending courage to Leo’s desire to be heard.  Uranus, modern ruler of Aquarius is making a square to the new moon.

Squares always motivate from a place of inner tension that simply can’t be ignored anymore.  Uranus symbolizes the profound awakening that’s occurring around the world within those who are daring to go against the mainstream narrative.

In Taurus this awakening occurs steadily and securely so that its effects will be long-lasting.  Taurus’s natural ruler is Venus, which has now moved into Virgo.

The sign of Virgo is influenced by Mercury and Chiron, both of which sit in fire signs that align positively with this New Moon. Chiron in Aries is about healing self-identity, and having the courage to think independently from the mainstream.  Mercury in Leo signifies that the personal mind must defer to the heart.

Venus in Virgo signifies sifting and sorting through the details related to our health.  As it opposes Neptune in Pisces, which has been retrograde since the end of June, its allowing us to take a step back and look again at what we’ve been taught to believe where health matters are concerned.

All in all, this new moon cycle signifies the opportunity to get to the “heart of the matter”, and for anyone who remembers the movie  “Born Free!“, it certainly epitomizes Leo’s message. 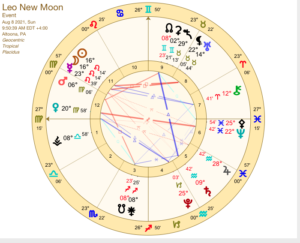 When we remember that our birthright –  as souls –  is freedom, and that the greatest power on Earth is love – no one can take these gifts away from us unless we fail to hold them dear.

Without the balance of Leo’s heart, Aquarian’s intellect takes a “superior” role.  Scientific advancement must be balanced with the heart in order for these gifts to be in service to, and to truly benefit, humanity.

To Life, love, and freedom,

The Science of Living in Harmony August 22 Aquarius Full Moon: Information Download…Did Someone Flip a Switch?

Virgo New Moon: Our Beliefs around Health are Changing

The Science of Living in Harmony